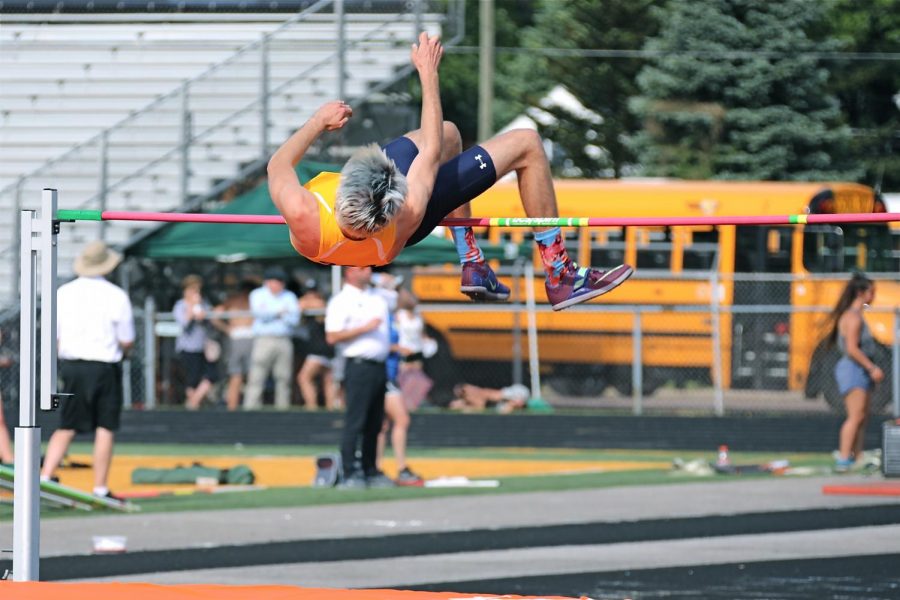 World-renowned soccer player known as Pele once said, “The more difficult the road to victory, the greater the happiness in the win.”

For one Blue Devil, the road to success has been a long one; however, through determination and grit, his dreams as an athlete have finally come true.

At the Field Relays meet in Brimfield April 30, junior Riley Murphy broke the school record of 6`6“ in the high jump. Before family, friends, coaches and teammates, Murphy jumped 6`6.25“ to achieve what no Tallmadge athlete has since 1994.

Satisfied, but not done yet, Murphy, just seven days later, broke his own record again at a dual meet between Tallmadge and the Medina Highland Hornets. Backed by his team and close friend and fellow jumper, senior Dylan Phelps, Murphy crossed the bar at 6`7.“

“The second time was just great, before I beat the record by ¼ of an inch just to get my name on the board finally, but when I jumped 6’7’’ it was just a lot more validating that I am the best high jumper to ever come through Tallmadge,” Murphy said.

Every journey has a beginning and Murphy’s is no different.

As Murphy tells it, “One day freshman year when I still didn’t really know what track was about and what all the events were, I was told to try high jump. I jumped in line with Lucca [Passarelli] and Dylan to run up and jump and see what happened and I remember that look on everyone’s face after my first trial jump. I thought I had done something terribly wrong, but they were all so shocked by how high I jumped with no practice.”

A true natural. Murphy’s freshman year would set up the talented junior for his dream accomplishment down the line.  In 2019, Murphy and Head Coach Mike Srodawa, who specifically works with the jumpers, traveled to Jesse Owens Stadium in Columbus to compete in the State meet for high jump. While in Columbus for the first time, he jumped 6’4’’ and landed at a lucky number 7th in the State.

Moving into his sophomore year, Murphy hoped to continue his athletic success, however, like many other activities in 2020, spring track at Tallmadge was cancelled. COVID-19 wiped out any chance for Murphy to return to the State Championships once again.

As the 2020-2021 school year rolled around and Tallmadge fall and winter sports got a chance to compete, Murphy knew his opportunity was back and his journey would continue.

Continue it did, to not only breaking the high jump record at the Field Relay Meet and Highland Dual, but also to breaking the 4×100 and 4×200 meter relay record, and leading the Blue Devils to a Suburban League Championship.

Murphy hopes to carry on and qualify for the Division I State Meet, June 5. Murphy competes at Regionals May 26 and 28.